No one is Illegal on Stolen Land 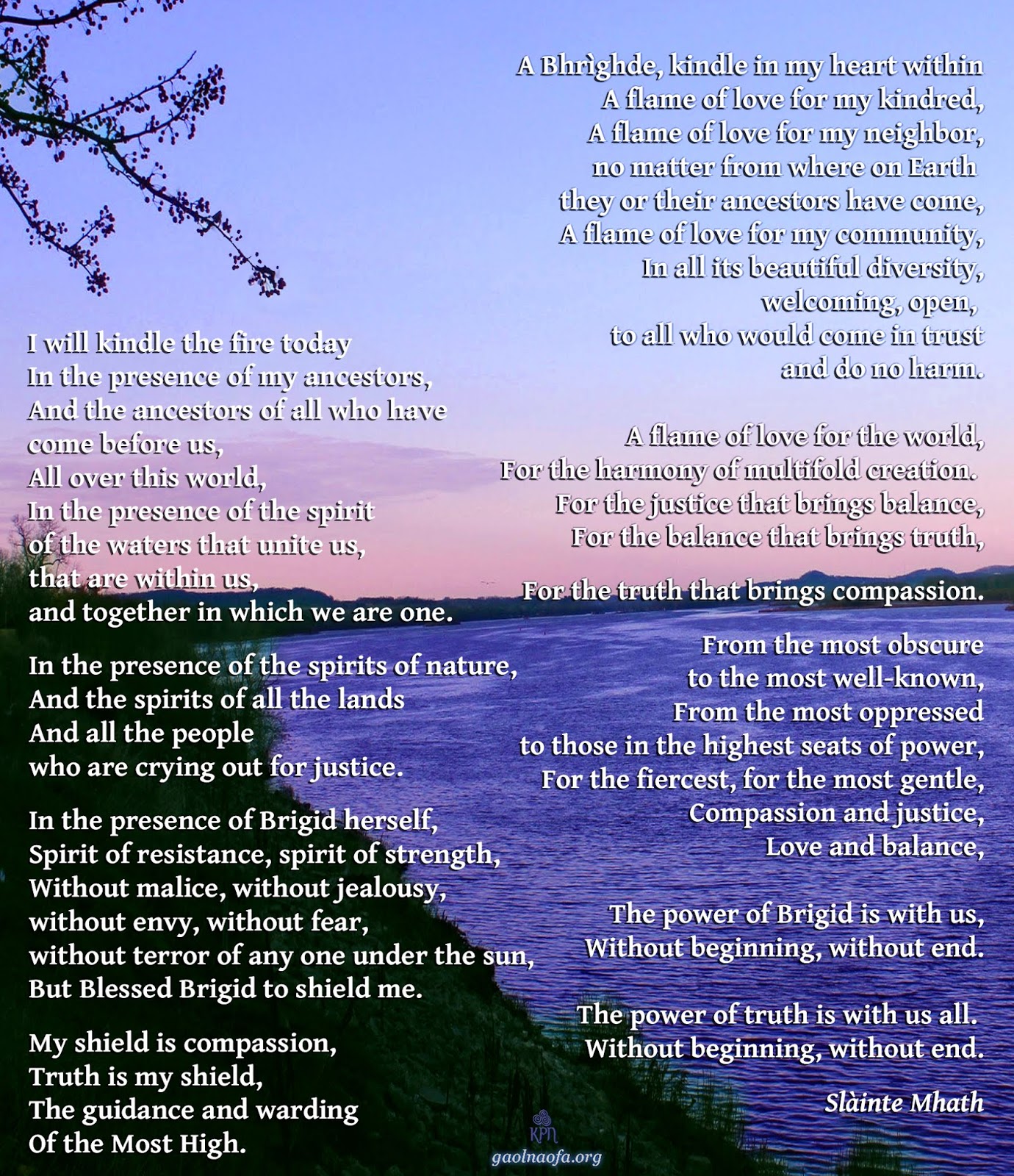 Posted by Kathryn Price NicDhàna at 5:09 PM No comments:

Labels: No one is Illegal on Stolen Land, Prayer 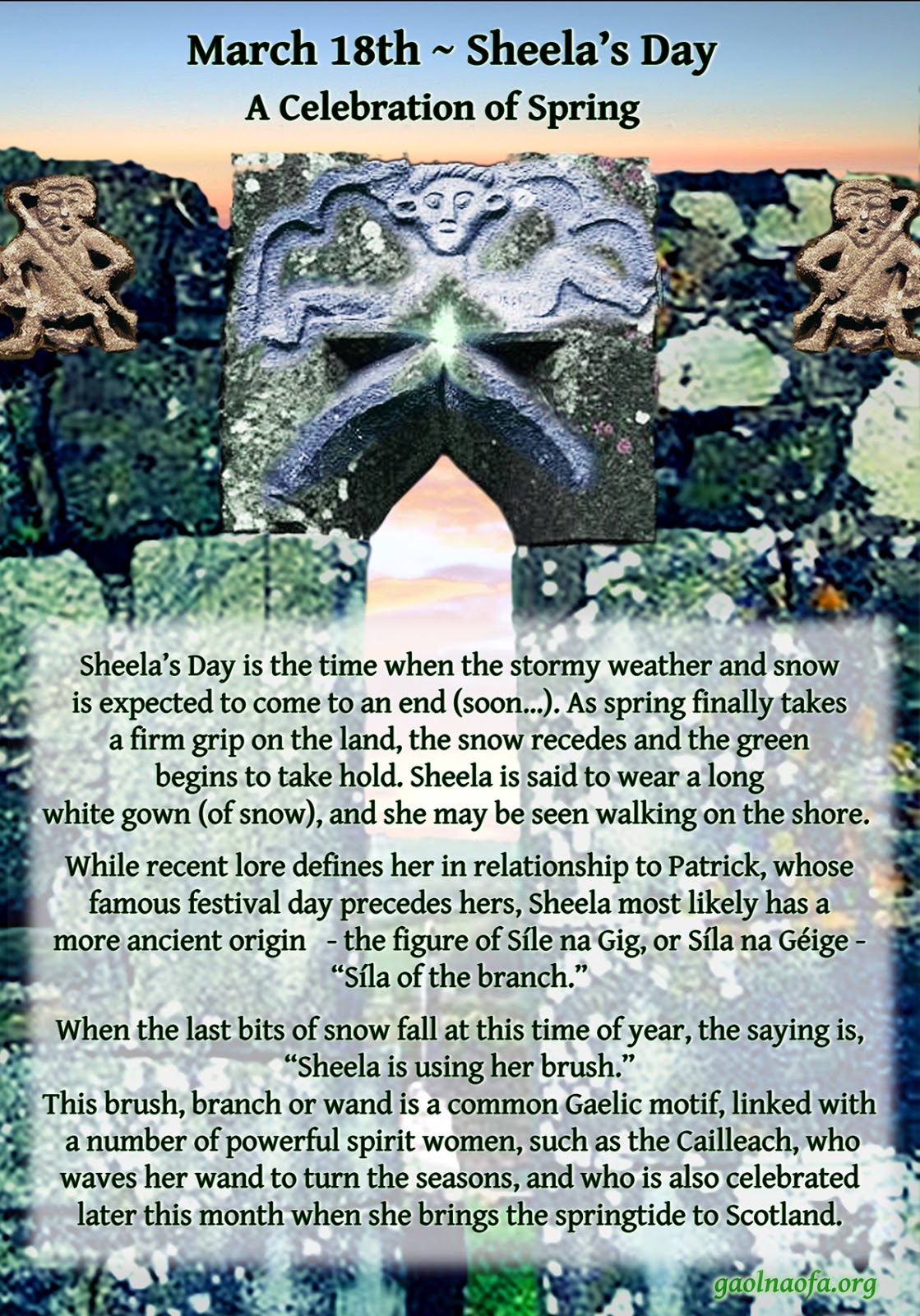 Today is Sheela's Day, which anticipates the end of the stormy season and the start of Spring. Although recent lore often says she is the wife, sister, or even housekeeper of Patrick, her origins may well be much older.

While there was a time when St. Patrick's day was a political and cultural celebration in the diaspora, or a quiet spiritual day in Ireland, many contemporary polytheists are not that keen on a day for Patrick. While we have made efforts to reclaim the day as a cultural celebration, and this has gone very well in areas with large Irish and Irish-diasporan populations and cultural options, for others an alternative celebration is more fitting.

In welcoming spring on Sheela’s Day, it is traditional to wear a fresh shamrock, which is then “drowned” in a glass as the day draws to a close. Perhaps this is the origin of the dreaded green beer, which most of us shun, along with the other plastic paddyisms of the season, preferring instead to bless and share water from a sacred spring, or milk, or other traditional fare.

Activities traditionally observed for the Hag in Scotland later in the month may also be appropriate at whatever time you welcome spring, such as climbing a hill and shouting poetry.

Our Là na Caillich video has more on this. Here it is, along with our Day of the Hag playlist. 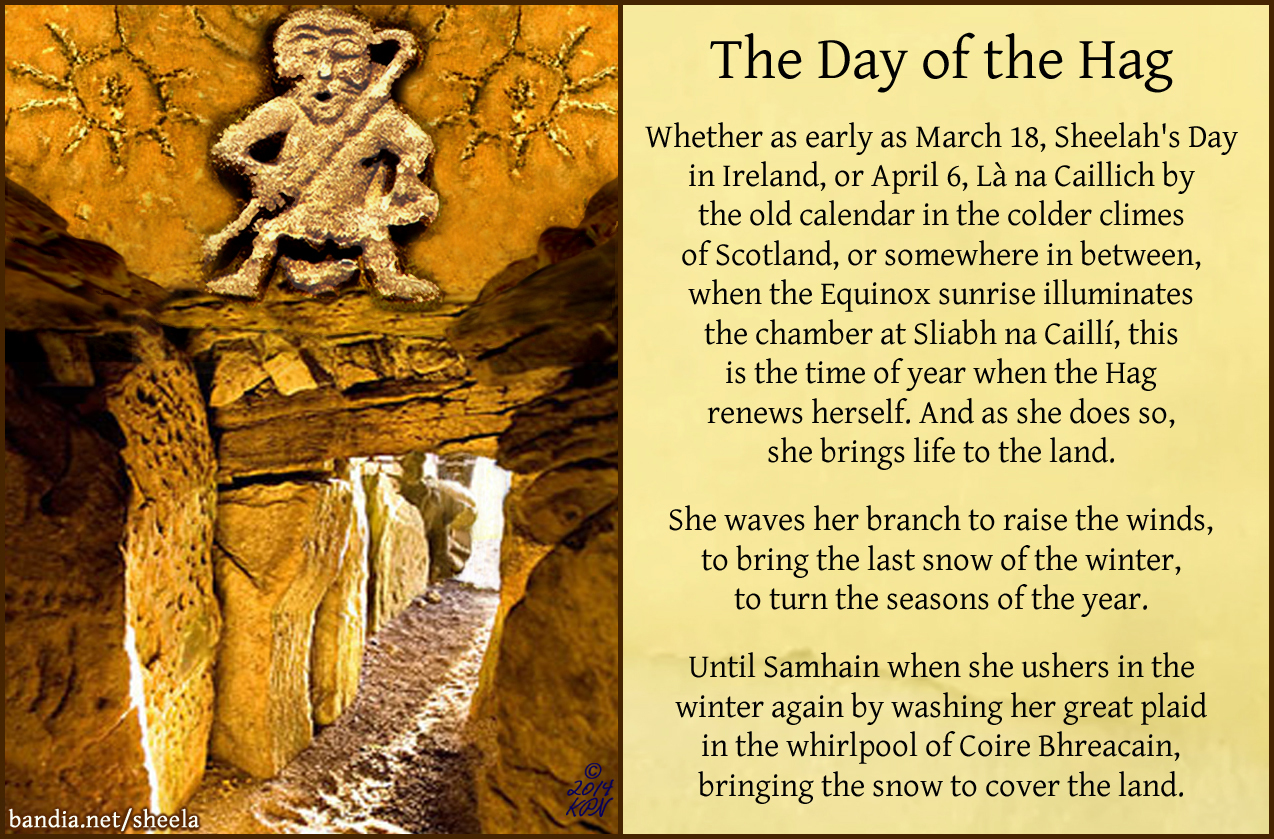 Posted by Kathryn Price NicDhàna at 4:28 PM No comments:

Solidarity with other Survivors

It's going to take me a while to find, let alone annotate or edit, all the content I have online that quotes or mentions Sherman Alexie. If you don't know... Several days ago the mainstream press published that five women have come forward about Alexie sexually harassing and threatening them. Now the number is closer to twenty. But, as is always the case, women in the community have known for far longer. And it has been exponentially unsafe for these Indigenous women to come forward. I've mostly been tweeting about it. And check the twitter stream. It's really just the tip of iceberg.

I stand with these women because while I'm not one of Alexie's victims, I am also a survivor of some similar threats, which in my case followed in the wake of horrific abuse. I cannot comment on the specific details of these women's cases against Alexie, or specifically what was done to silence them. But in my case, I know what it's like to live with constant death threats and surveillance, stalked and libeled by both the predator and the predator's enablers. Some of the enablers do it for status in the eyes of the predator, some of the more sleazy ones have done it for pay. This is the ultimate cruelty that piles on to the CPTSD - to survive torture, and then to be stalked like prey. As the more recent, mainstream, white wave of the #MeToo movement has built, there has been the predictable backlash from those who've never actually experienced assault or serious abuse, who have compounded this abuse of actual survivors by blaming us for not being more outspoken, or not speaking out earlier, even when we were living in fear of a dangerous predator. It's because of these accomplices that enable the abusers, that hound the victims and continue the torture, that so many of these predators are able to do so much damage for so long.

As I had meant to note in the previous post, the flu has hit hard here. Which is really serious for someone like me who is already immuno-compromised. I don't talk much about disability on here, as I'm from a generation that is more private about this stuff, and I don't want to be defined by my limitations. But sometimes I have to mention it for my life to make sense. Right now I don't have it in me to go through all the posts, but I will as soon as I'm feeling stronger. So I needed to make a note about this so, if any of his victims are reading this, you will know I have your backs - I believe you and stand with you - and that it is only my own struggles that are impeding my ability to thoroughly handle all of this right now.

Love, strength and protection to the survivors who are speaking truth to power. This one has been horrible to hear, but nowhere near as horrible as what those who have lived with this silence have had to endure. Thank you for speaking out.

ETA: Sunday 26 Feb 2018: Debbie Reese of American Indians in Children's Literature has now posted An Open Letter About Sherman Alexie. Deb was among the first to break and follow through on the story online, and has been tireless in not only supporting Native women in coming forward about this, but in promoting the many Indigenous women writers who are continually overlooked as men like Alexie have gotten all the contracts, sales and speaking engagements. She has included a timeline of this developing story, with links, and is continually updating the coverage, as well as continuing to promote alternative authors to those now removing Alexie's work from their curricula. It was Deb's tweets about her decision to remove or annotate the mentions of Alexie on her pages that inspired me to do the same last night. Thank you, Deb.
Posted by Kathryn Price NicDhàna at 5:22 PM No comments: 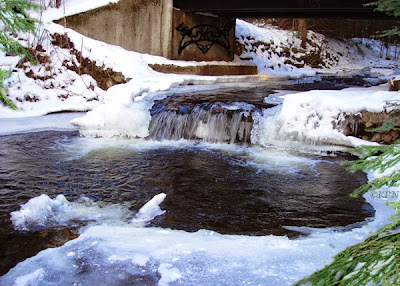