It's that time of the year again.

Before you wish us "Happy" "Saint" "Patrick"'s day (or even better, "St.Patty's") you might want to check out this year's roundup of links:

Gorm sums it up well with, Leprechaun Vomit... or why I hate St. Patty's:


So when a day is supposed to be about celebrating a culture, about celebrating an identity, and that identity is then popularly portrayed as being the worst stereotype of that culture, the meaning and significance is completely lost in a sea of four leaved shamrocks, leprechauns and an alcoholic haze. It isn't an appropriation of Irish culture, because you would need some actual Irish culture to be appropriating. No, its bizzarely just a sophmoric misrepresentation, which is then celebrated as being authentically Irish; cultural misappropriation, perhaps?

The harm, of course, is completely lost on such folks because their closest contact with actual Irish culture or tradition is the bowl of Lucky Charms they had for breakfast. It is an argument from ignorance because they do not understand the significance, and so are indifferent to the point of arguing that people who do get upset or irritated by such portryals, "just need to lighten up."


Then again, one could argue that faulty interpretations of history (and culture) are what St Patrick's Day is all about now. Some years ago, Ben and Jerry's ice cream released a special edition flavour to "celebrate Irish culture." They had the brilliant idea of calling it "Black and Tan," which oh no, couldn't possibly be offensive at all - it's a drink, right?

Umm. No. Not just a drink, anyway.

After the outcry, they pulled the ice cream and apologised profusely. So it's quite perplexing that Nike have now decided to "celebrate" in a similar way with their Guinness and Black and Tan trainers. Awww. Bless 'em. I like how "celebrating" is unashamedly synonymous with "cashing in on" and "being totally unaware of history."

And one from the vaults: Five years ago I weighed in on the the Irish-American dilemmas of this blessed day, and don't have more to add that the others haven't already covered: Anciente Oirish Family Wisdomme:

Or, if you're lucky to live somewhere (as I do now) where people only use the holiday as an excuse to schedule Gaelic music and arts performances, and there's no more drinking than usual, and no one dyes anything green (except maybe their hair), go out and support real Irish culture. Go to a language class or seisiún, support an Irish-language (Gaeilge) musician or arts group. Make offerings to the deities, spirits and ancestors who roamed the land before anyone ever heard of St. Patrick. Remember what lives below the surface, what sustained us long before anyone commercialized and exploited a few, distorted elements of the culture. These things can, and do, sustain us still. So, if you want to be "Irish for a day," find out what Irish really is, because, for the most part, it's not what you'll see in the streets this weekend. 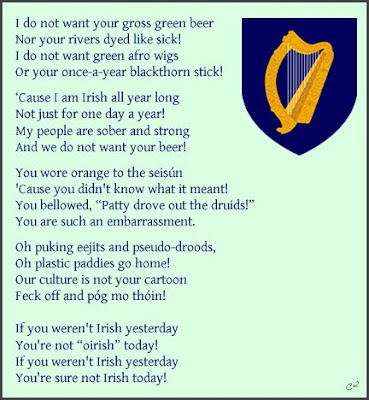 ETA: And Treasa weighs in with: "The Luck of the Irish" and a Link Round-Up
Posted by Kathryn Price NicDhàna at 3:58 PM No comments: