The Resurrection of NAFPS

The good people at New Age Frauds and Plastic Shamans (NAFPS) have been through some hassles lately. A Newage magazine publisher who profits from ripping off Native cultures, and who actively promotes a number of the worst Plastic Shamans and other spiritual frauds, recently trolled the forum and, when that didn't disrupt things to his satisfaction, lied to the group's server and got the message board shut down.

Thankfully, they have found a new host for the board, and it is up and running here: http://www.newagefraud.org/smf/index.php

As this is not the first time this sort of attack has happened, members were prepared and had archived the old board. Hopefully soon the website will be fleshed out again, as there were some very valuable articles on the old site which I would love to see available again. Specifically things on the abuse of the Sacred Pipe and Inipi.
Posted by Kathryn Price NicDhàna at 3:44 PM No comments: 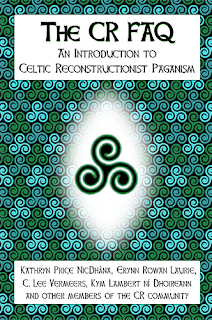 (Why am I reminded of the Kliban cartoon where Jesus is walking down the sidewalk, with bouncers strong-arming people aside and growling, "Make way for the Prince of Peace!")

Uh, sorry, I obviously have some ambivalence around the whole self-promotion thing.

Anyway, yes, published author. Make way. Technically, if periodicals and anthologies count, especially ones that pay, I've been "a published author" since... uh... I think it was 1980 (I swear, I was very young). But this is the first full-length book for which I've gotten top billing.

It is, of course, the book version of The CR FAQ. But now it is also incarnated as a book, with a glossary, index, and all those "My Gods, it's a real book!" bells and whistles. You can read more about it here. Or just go ahead and buy a copy, here.

Preen with me, why don't you?
Posted by Kathryn Price NicDhàna at 10:01 PM No comments:

For the past 10 years readers and speakers of Gaelic, as well as Bòrd na Gàidhlig, have been asking Bloomsbury Publishing to print a Gàidhlig version of the Harry Potter series.

I know that qualified translators have come forward to help, but for some reason nothing is happening.

We have been urged to contact Bloomsbury about it if we want to see any progress on the matter. You can e-mail them at publicity@bloomsbury.com

A few reasons you can give them for why they should publish the books: We'll buy them. They would be helping preserve and revitalize the Gaelic language. They would be providing incentive for children learning Gaelic in school, or who hail from Gaelic-speaking areas, to read. And of course, because we'll buy them.

The Harry Potter books have already been published in 67 other languages, including Gaeilge (Irish Gaelic), Basque, Welsh, and Frisian; and even in languages which have far fewer speakers than Scottish Gaelic, such as Faroese, Greenlandic, and dead languages including Ancient Greek and Latin.

Thanks to the members of Fòram na Gàidhlig for some of this information.

cross-posting encouraged (but don't be obnoxious about it ;-))
Posted by Kathryn Price NicDhàna at 2:56 PM 3 comments: