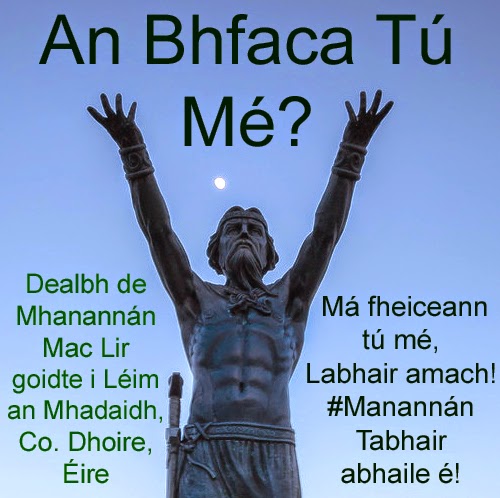 The search for the Limavady Manannán statue continues. As Gaelic Polytheists, as people involved in cultural preservation, we are continuing to assist the effort, via networking and raising the alert via the Gaol Naofa and CAORANN pages on Facebook and Twitter (Gaol Naofa Twitter, CAORANN Twitter), and now with a new video and some more memes.


For this video we have compiled some of the many, astonishingly beautiful photos of the statue and land in Limavady, County Derry, Ireland (Léim an Mhadaidh, Co. Dhoire, Éire), plus a prayer we are using to call Manannán home. This video also has the Manx lyrics synched up with the corresponding verses in the song, to better facilitate learning.

We are calling Manannán from wherever he is, to show himself in the world, and to reveal the whereabouts of the statue. If the statue has been destroyed, we will support efforts to have it replaced. But it is up to the people of Limavady, and the sculptor, John Darren Sutton. The Limavady town council has expressed interest in replacing it themselves. After all, they originally commissioned the piece as part of their sculpture and heritage trail. If their budget will not adequately cover a replacement, we have also promised to help with any needed fundraising. While it's impressive to see the worldwide attention on this, those of us in the diaspora need to remember that any fundraising - if it is even necessary - needs to go through the local community in Ireland, specifically the Limavady community, and not through any individual from outside that community.

These amazing photos were largely collected via the Facebook group, Bring back Manannan Mac Lir the Sea God.  All the photographs in the video and memes are used with permission from, and gratitude to, the photographers (see the video credits for the full list of participants). Feel free to share them to keep the search for the stolen statue on the front burner.

The theft continues to get a great deal of press in Ireland and worldwide, and in specialized media like The Wild Hunt, who quote Annie and mention our work with Gaol Naofa:  Calling Manannan mac Lir Back Home.

See the update on the Gaol Naofa site for full details: Where is Manannán? 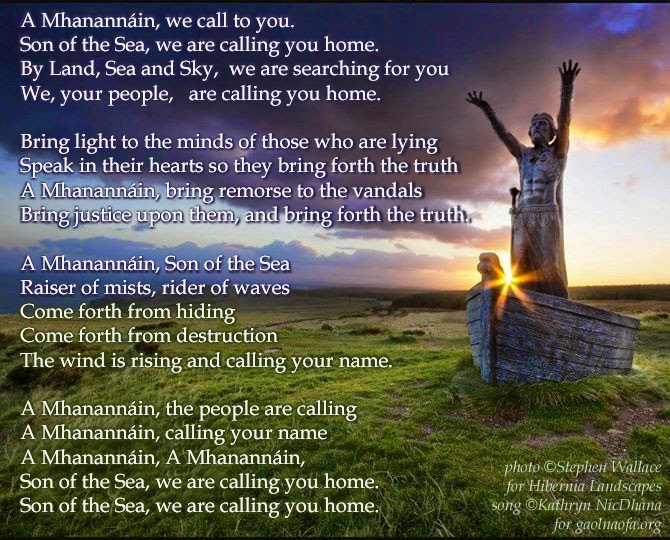 Posted by Kathryn Price NicDhàna at 6:54 PM No comments:


By land and sea and helicopter, by beaches, trails and roads, Irish people are searching for the stolen statue of Irish sea god Manannán mac Lir.

Locals in Limavady have issued a Missing Persons Alert: 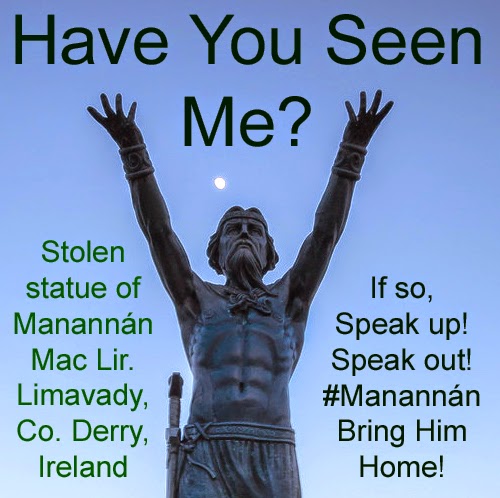 DESCRIPTION - A well known six foot tall striking local male with an athletic build. He has shoulder length hair held back with a headband and has a beard. We have concerns for his health in this weather as he is bare chested with only a thin shawl held at the neck with a decorative clasp to keep his top half warm. Evidence at the scene suggests he has injuries to his feet!

He is a very striking fella so if you have seen him please let us know.

Locals have searched the area and have completed an overflight to check he was not dumped in the area.


And a local funeral director is offering a reward for the statue's return.

On the polytheist front, we are making offerings to him, and singing his traditional songs. We are asking Manannán to help the police and citizens who are searching, and to spur someone who has information and is feeling uneasy to do the right thing and come forward with the truth.

While some are suggesting a co-ordinated, timed effort for the night of Jan 31 - Imbolc, this coming Saturday - we are not waiting for a particular night. We are on this right now.  Manannán is a guide and guardian of our Gaelic Polytheist and Gaol Naofa community, so we are singing to him every day and night. As we have been since this news broke and will continue to do until justice is done and he is brought home.

The many people who love this statue, be they polytheist, Christian, or any other religion or lack thereof, are sharing their photos on the Facebook page, Bring back Manannan Mac Lir the Sea God. While most are those who just love the statue as art and history, others are sharing altar photos as well.

This Manannán playlist has a video of sculptor John Darren Sutton creating the statue from the clay on up, along with local reactions to the theft (here on YouTube for those who can't get Northern Ireland TV news broadcasts) and more songs for him. For the tune and pronunciation of the Manx song in the meme above, see our Midsummer video in the same playlist. We will be adding more Manannán information and materials to the playlist as the situation develops.

Posted by Kathryn Price NicDhàna at 7:39 PM No comments:

"Those who made off with the sea god left a wooden cross with the words 'You shall have no other gods before me' in its place." - Fiona Murray BBC News NI, Game of Thrones sculptor's sea god statue stolen from mountain.

This statue of the Celtic sea god, Manannán Mac Lir is a religious icon. People have been leaving offerings there, tourists make pilgrimage, photographers have spread his image worldwide, and local people still tell the stories of his protection of the land and relationship with the sea and local weather patterns.

Apparently, some people who pretend to be Christians don't like this.

Whether this was done by art thieves looking to lay a false trail, or by intolerant people who betray their supposed lord's message of tolerance and love, this is a hate crime.

Manannán is the guardian of the land on the Isle of Man and in other Gaelic areas. He is also one of the founding forces, guides, and guardians of the Celtic Reconstructionist and Gaelic Polytheist communities. For him to be out in Nature, high on a mountian, overlooking the sea, was profoundly moving, and those who have stolen him have desecrated something sacred.

If this was really done by those who claim to be Christians, this is a relgiously-motivated hate crime against a minority spirituality. For Irish people, even those who consider themselves Christian, or of another faith or no religious belief, Manannán is part of our history and culture, and this is a crime against all the Irish people who still respect history, culture, and the spirits of the land, sky and sea.

Our prayers are with the sculptor and all the people - local and worldwide - who are shocked and hurt by this crime. Our prayers are also with everyone investigating this and searching for the statue, that they quickly recover the statue and bring the criminals to justice.

So be it. Sláinte Mhaith.

If you have any information on this crime or the whereabouts of the stolen statue, please speak out. Talk to the members in your community, use social media, and let's take care of this. Feel free to reuse this meme if you like. This was a deliberate act of desecration, involving several physically strong people, a lot of noise, power tools, several hours at the statue, a truck or van, and planning. Someone who doesn't agree with this hate crime has to have seen or heard something. We pray they come forth now.

Sculpture by John Darren Sutton
Top photo courtesy the artist via his facebook page
Photos for "Missing" meme and Aurora Borealis copyright Neil Maroney, who I hope will understand re-use with credit, given the situation.

ETA: For more on Manannán, and a song to call him home, I am reposting our video about him that we released last summer.


If you're looking for the lyrics to sing along, the first part of the track is a traditional Manx song called "C'raad ta'n Ree?" which you can find a version of on the Gaol Naofa website: http://www.gaolnaofa.org/library/music/craad-tan-ree/

The second part is a song/prayer, which Breesha Maddrell notes is still popular with kids today: https://thesession.org/tunes/12899 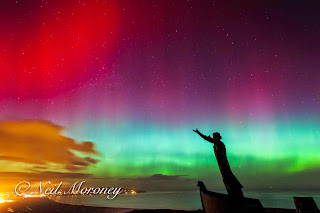