In honour of Là Fhèill Whatever, we've made an Autumn / Lá Fhéile Mhacha / Là Fhèill Mìcheil playlist, which includes several examples of earth-honouring, community traditions that survive in the present day. We have practical demonstrations of wheat-weaving (if you want to make a Cailleach figure for the harvest), the Cailleach an Dùdain (Old Woman of the Mill Dust) song, footage of the Riding of the Marches in Scotland, and of course the Seaweed Molly festival.

The Riding of the Marches is pretty clearly about boundaries - namely the practical act of checking the fences and edges of the territory, and perhaps there's also something spiritual here. At Samhain, hard choices - literally life and death - need to be made by those who raise livestock; Samhain is traditionally the time to decide how many animals can make it through the winter, and how many are going to be slaughtered for meat. At this festival, those who farm are bringing in the last of the grain, so this figures into the winter planning as well, and is clearly symbolized by the slowest person to finish the harvest having to support the Cailleach for the coming winter. It would also make sense that those with the largest fields need more time to bring all the grain in, so this tradition could be a way of recognizing that personal abundance calls for community responsibility - if you have more than you need, proper hospitality and honour leads one to want to share that abundance with those who don't have enough. And maybe having your neighbors toss the Cailleach at you is a way of making sure everyone upholds that bargain.

The Seaweed Molly rite is about giving back to the sea - making an offering of gratitude and thanks that the sea spirits have been kind this year, and not taken back (drowned) any people from the community. I also find it touching that the modern survival has these young surfers and lifeguards carrying the Molly doll (much like a Brideóg) from door to door and recieving honours and gifts for their part in maintaining community safety: Another safe year of swimming in the sea. How fitting that they then paddle out to make the offerings to the spirits on behalf of the community that they help protect.

For more detail on all of the above, see our other recent posts over at the Gaol Naofa Facebook page.

‪
Posted by Kathryn Price NicDhàna at 1:33 PM No comments: 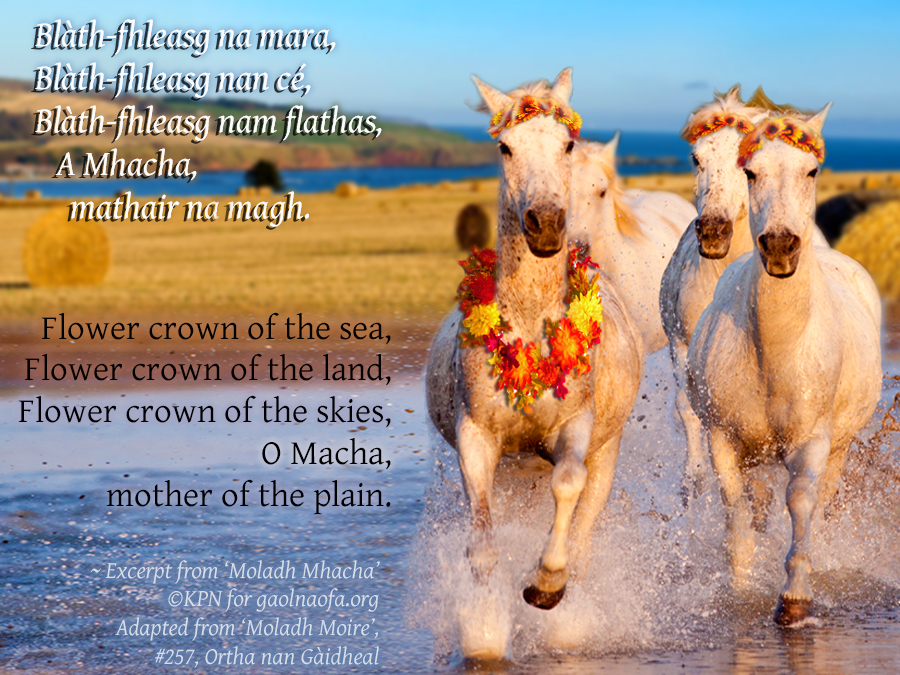 Feel free to share this meme, as long as you link back to either our meme page or our facebook post.
Posted by Kathryn Price NicDhàna at 12:23 PM No comments:

Those of you who follow us on social media may have seen the memes we've been creating. We've added a page to the site to archive the ones we've done so far, and where we'll be posting more in the future: Gaol Naofa Memes. We've been working with a mixture of proverbs, prayers, triads, and quatrains from various Goidelic sources, doing our bit for language preservation and providing links for further info. For regular updates follow us at our Gaol Naofa Facebook page and Twitter account.

Posted by Kathryn Price NicDhàna at 5:57 PM No comments: