Call to action and request for support: Base camps are forming at the Sacred Peaks. Grab your affinity group and head over, or support in whatever way you can. The landbase and watershed is threatened by developers clearcutting for ski resorts, and their plans to dump sewer water into the snow-making machines. Direct action is in motion, right now.

People are mobilizing, and those putting their bodies on the line are imploring us to spread the word and strengthen their impact in whatever ways we can. Strength and prayers to those holding the line today, for as long as it takes. Moran Taing agus Slàinte Mhath!

Hello all you hard working supporters of sacred sites. We are quickly moving towards the critical mass of people prepared to move this to a full fledged sit-in. Eleven basecamps set and at least 15 more who have announced they have started travel, and growing. The CookShack affinity group has made a public call for joiners, and will be taking a public role. Here are the problems we are running into, especially here in Flagstaff. [To those not on-site] The destruction is not real or everyone is in some stage of denial. Petitions will not save us. The superhuman lawyer Howard Shanker has been neutralized. The coalition court case is now the perfect smokescreen for the Destruction. People sit thinking that a legal decision some time in September will stop destruction that is ALREADY HAPPENING. So join Operation: Become the Media today:

3. Spread the word on Facebook by tagging your friends. This link will take you to Facebook Event with a note to help you get started tagging right away: Join the Peaks Tagging Crew.

4. Become the media. Don't wait for Randy Wilson to mangle the story. Write the story. Give it to your friends. Who are they going to believe? You and your eyewitness reports or a half-spun version in a newspaper funded partly with Snowbowl money?

5. Help people snap out of it. I know, Tsunamis, Earthquakes, 20% house foreclosure rate, nearly 25% of the country out of work, massive fires from a century of forest abuse, war in the east, war in the west, etc. Yep It's all connected. But it feels really good right now to know that there is one place we can take a stand. We can make a difference. And it is right here, It's the Peaks. It's a start!

6. Spread the word! Petitions were used as toilet paper. Letters were thrown away. The lawsuits have become a smokescreen for the greedy to do their destruction. The destruction is real and it is time to interrupt our normally scheduled lives and converge on the peaks!

Grab your camera, grab a friend, go right up on your public lands and film it and let the world know! It's up to you now. Do not go alone, and if Arizona Snowbowl harasses you, call the police on them. You have the right to be there, it is your land! And film that too :) 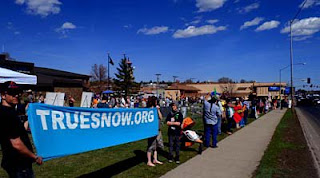