Cultural Appropriation Post #949 (but with quotes from... oh no, #HimToo)

Sick of reading about Cultural Appropriation? Bet you're not as sick of hearing about it as I am of having to write about it. But guess what? I'm going to do it some more.

There's nothing new about the James Ray Plastic Death "Sweats". Over the years at least a dozen other newagers have died, and many more have become violently ill, in these pretendian ceremonies with various plastic shamans. You will note however that, with only one exception,* those who have died have not been Indians.

It is vitally important that people remember the James Ray Death Camp was not a Native American thing. What happened there were not Native American ceremonies. This was a racist white man exploiting non-Indian people's fantasies of "Vision Quests", "Lodges", "Spiritual Warriors" and wind through their hair while white wolves howl their pretendian names and vast desert vistas sweep away from their yin-yang painted tipis. They didn't want to know anything about real Indians, real Indian lives, and real Indian ceremonies; they want Dances with Wolves and they were gullible and desperate enough to pay some predatory cult leader $10,000 to get that fantasy. The sick irony is that they thought these fake ceremonies, almost-unrecognizable imitations of ways that, when properly embedded in the cultural matrix that is necessary for their existence, are based in humble self-sacrifice for the benefit of one's family and community, would instead make them wealthy and famous, superstars of their lonely ego-driven dramas. 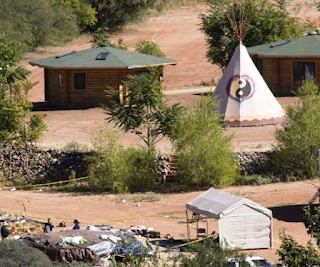 In 1992, the "Men's Movement" amped up the white fascination with romanticized fantasies of Indians. Many white men tried to adopt and adapt a "white man's sweat" as some kind "sweat out the bad shit", misinterpretation of what is actually a prayer ceremony, and not at all what they think it is. Now, after decades of non-Natives teaching non-Natives, we have people who are so far removed from anything authentic, but who fully believe what they are doing is a Native ceremony, that it's no wonder people are still spiritually empty, yet risking their lives for this hollow experience. They try to make it bigger, louder, hotter, and even dangerous now, all the while completely missing the point and purpose of the entire thing.

These appropriators simultaneously believe they can read some books, bang a drum and howl, and become the "better Indian," but that when it all goes off the rails somehow it's Natives that owe them something when they go and damage themselves.

What it keeps coming down to is that non-Natives routinely see Indians solely as spiritual providers, there to tend to their needs. It is so rare to find exceptions to this. White people in particular usually have no shame about being the walking wounded, flinging themselves on the doorsteps of random Indians, often Indians who know no ceremonies, and who are having rougher lives than these entitled white people could ever imagine, yet here come these refugees centering their privileged selves, not caring one bit the damage they do to the people, families and communities they are trying to colonize.

Update: 24 Feb 2018   I originally had an entire section here linking to, and quoting, Sherman Alexie, about appropriation and cultural boundaries, and 101 issues such as "Nothing about us, without us." Today I became aware that about twenty women, most of them Indigenous, have come forward with horrific tales of sexual abuse, harassment and threats from Alexie.

I can no longer in good conscience promote his work. As a rape survivor, as a survivor of stalking, slander and libel by both the serial rapist and the co-conspirators my assailant drafted to help him stalk and libel me, I know what it's like to face this kind of harassment. I know what it's like to be surfing the net and feel punched in the face by seeing someone acting like a man who tried to ruin your life is a great guy.

So, I've removed what Alexie had to say about, cough, listening to the women in your life, ahem, as an analogy for listening to Indigenous people. He went on at length about how other men just don't write or treat women as full human beings, and other writers just don't write Natives as full human beings. I'll let history place his words in context.

In the intervening years plenty has been written about cultural misappropriation. We don't need his words here anymore.

For more on Alexie, and on my own issues with PTSD, CPTSD trauma and disability: Solidarity with other Survivors

* Note - As archived by Heather at Don't Pay to Pray, one 2009 death in a "lodge" was a First Nations man in Canada, Lawrence Catholique. However, there were some very odd and suspicious things about that incident. Despite being a traditional healer, nothing about the circumstances resemble a sweatlodge ceremony from any First Nations culture that I am aware of. A later article says he had changed the ceremony, "experimenting with wood embers in the lodge". It was a tragic death, but if reports are true, he had changed the ceremony, deviating from the time-tested safety protocols. Also, add third James Ray Death Trap victim, Liz Neumann, to the list of dead newagers. She is the woman who was in a coma, who died after the Don't Pay to Pray blog post.
Posted by Kathryn Price NicDhàna at 3:55 PM

I saw a recent segment on dateline or 60 min about the James Ray Plastic Death Sweats. What angered me most about the segment was that the sweat was identified as coming from the American Indian tradition, but nothing else was said to help the audience understand that this was not how American Indians run a sweat. Not that the reporters should tell how it can and should be done, but more to make it clear that "kids shouldn't try this at home." I would have preferred to hear some American Indian voices on the matter in the segment. I believe there are too many people out there that will take what James Ray did and assume sweat lodge ceremonies are too dangerous and then try to interfere in the wrong places and with the wrong people. I can't beleive how gullable those "customers" were. . .turns my stomach

This invisibility of Indians and misrepresentation of Ray's Death Lodge as a Native ceremony has continued over the intervening year and a half since I wrote this post. Sadly, these skewed portrayals have been the racist rule for mainstream coverage of the trial, not the exception. I did some summation of the issue (Racism and Invisible Indians in the James Ray Trial) in a more recent post, here: http://nicdhana.blogspot.com/2011/06/james-ray-guilty-three-counts-negligent.html