Pictures and Report from Samhain on the Hill of Tara

Organizers of the Samhain bonfires in Ireland have posted a report and pictures from the ceremony on the Hill of Tara. 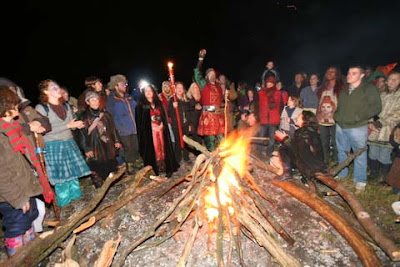 Re-lighting the Sacred Fire on the Hill of Tara

Those we've heard from who were at the main fire have said they could really feel the energy, the love and protection coming to them from all over the world. *does happy dance*

Groups and individuals in fourteen countries, nineteen areas of Ireland, and twenty-one US states participated.

These are the areas we know of. We're still hearing about more participants who have only contacted us after the fact. The oldest participant we know of was one officiant who is eighty, the youngest an infant in his mother's arms. All joined in Gaelic Polytheist ritual to protect Tara.
Posted by Kathryn Price NicDhàna at 1:22 AM No comments: