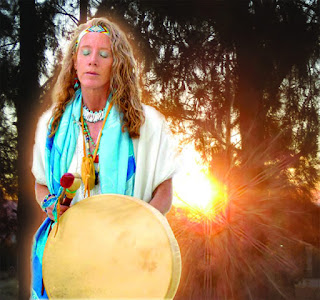 Now she's looking for some place to sell her fake ceremonies and "prayerformances" (her word), and she's hoping she can find some place where there are no NDNs, and where no one cares about misappropriation. Her only performances and workshops in the US in the past five years have been in all-white, gated enclaves. She's gotten some confidence back by selling her pretendian schtick to Jews & tourists in the Middle East. Now, five years after her broken promises, she is once again looking to branch out. This is from her Facebook page (It looks like you will have to temporarily "like" the page to see the posts): 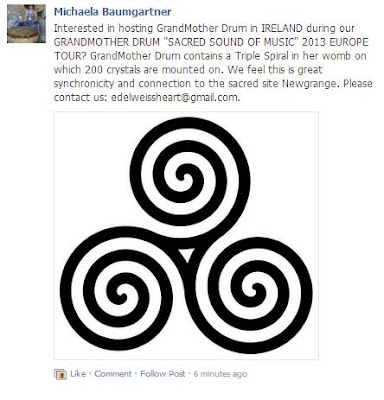 Holzwarth photoshopped a version of a spiral from a Christian manuscript into one of her bizarre publicity photos: 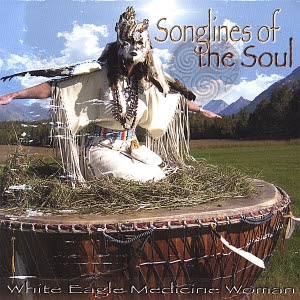 It's not even an image of the Newgrange spiral. Ripping off an unrelated image from an Irish manuscript gives her no more connection to Newgrange, or any other Irish sacred site, than does her hanging Australian eagle feathers off that death drum and claiming it gives her the right to represent Native Americans. Yet she has lied and claimed to be "Celtic" just as she has lied about being Seneca. She has never shown that she knows anything at all about Irish (or any other Celtic) culture. She just tried that old racist ploy of thinking "Celtic" can be used as shorthand for "white appropriator." When pressed, she has admitted she is Jewish. There is nothing wrong with being a Jew, but apparently Rachel seems to think so. It looks like she has tried to be lots of things.

The death drum contains human remains and human blood. It is evil, like the racist pretendian fraud who bangs on it, the one who has openly espoused the racist theories of Steiner - suggesting that all the NDNs need to die so the white people can inherit their medicine. Anyone of any spiritual sensitivity who has been near that thing can feel that it is bad, bad ju ju. Anyone with basic human compassion for oppressed people must stand up to this crass exploitation. 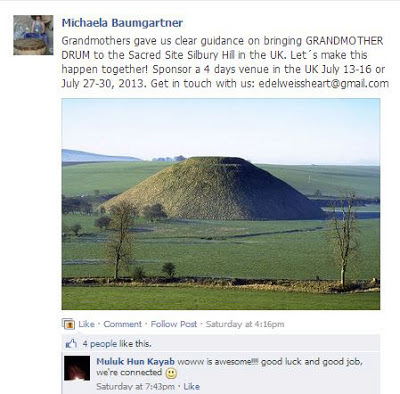 Heads up, Irish and English folks, and anyone else in the Isles. Don't let this woman exploit you the way she's tried to exploit Indigenous people everywhere she's gone. Don't let her come to your land, don't let her present there, don't buy her lies.

Don't let her rip us off the way she's ripped off Native Americans. Don't let her steal our ancestors or sell a mangled misrepresentation of us to the capitalist newagers. Don't let her use us to promote her racist agenda.