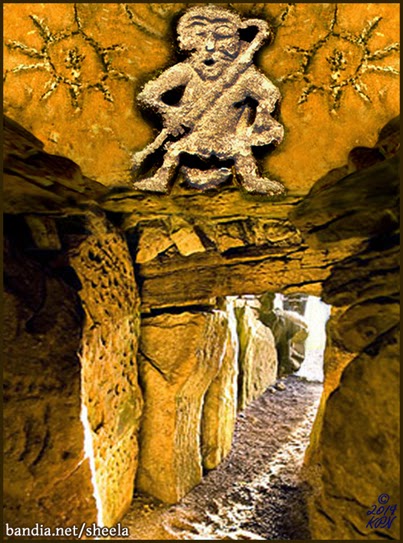 Day of The Hag

photo montage copyright ©2014 Kathryn NicDhàna
from images of the Romsey Sheela and the equinox illumination of Sliabh na Caillí, Éire


Whether as early as March 18, Sheelah's Day
in Ireland, or April 6, Là na Caillich by
the old calendar in the colder climes
of Scotland, or somewhere in between,
when the Equinox sunrise illuminates
the chamber at Sliabh na Caillí, this
is the time of year when the Hag
renews herself. And as she does so,
she brings life to the land.


She waves her branch to raise the winds,
to bring the last snow of the winter,
to turn the seasons of the year.

Until Samhain when she ushers in the
winter again by washing her great plaid
in the whirlpool of Coire Bhreacain,
bringing the snow to cover the land.

We still have more in the works for the season, including an overhaul of the Sheela website with new content, and additional Gaol Naofa videos. But sending you all greetings today, since the 25th is the modern calendar date of Là na Caillich. Hope everyone's having a good Spring! Slàinte Mhath!

Posted by Kathryn Price NicDhàna at 12:02 AM No comments:

For those of us with Irish heritage in the diaspora, this is one of the most awkward and uncomfortable times of the year. While we are relieved at the lengthening days and warming weather, glad to have survived another harsh winter, we are also horrified at the debacle that is American and Canadian Saint Patrick's day.

As I write this, the riots have started. In one college town this weekend, thousands of students celebrated their idea of St. Patrick's day by drinking themselves sick, puking on their violent green t-shirts, assaulting one another and hurling bottles and rocks at the riot police that tried to stop them from harming other civilians. This behaviour is shameful, and as an Irish-American it makes me very sad and dismayed to see this happening yet again in the name of "Irish pride." Of course, I think only a minority of those rioters even have Irish heritage. And what heritage they have, they dishonour.

As I've written about before, to attend some of these awful festivities can put your safety in jeopardy. And the thing is, these drunken blowouts have nothing to do with being Irish.

In past years, we've done our best to avoid the whole thing, or to quietly educate via online discussion and memes.

This year, we've decided to get proactive.

We're pleased to present an article debunking some of the myths around St. Patrick's Day: Pagans, Polytheists, and St Patrick’s Day, as well as two videos on the topic.

Video one is a general introduction to the problems with the stereotypes, and video two is directed more specifically at the myths around Patrick himself, and the misinformation spread by both Pagans and Christians.

Our Gaol Naofa video channel has been in the works for a while now. Treasa made our first videos two years ago, then we stalled out a bit on getting more done. This year we've tried to use our anger and frustration around the whole St. Paddy's thing to motivate us to finish up some projects and counter the misinformation. Check out our playlists for other videos that should be of interest to Gaelic Polytheists, or anyone interested in Celtic Reconstructionism and Gaelic cultures in general. If you like what you see, feel free to subscribe, as more is in the works.

As we say in the videos, we welcome the spring, and celebrate the Hag who turns the seasons. She, and the Earth, are renewing themselves now, and we honour her.

We also honour our ancestors who worked so hard to survive oppression, famine and exile. The St. Paddy's parades in the diaspora initially began as cultural celebrations - a day for members of an oppressed ethnicity to gather together and celebrate their survival against the odds. It was only after our recent ancestors "became white" and rose to power in the police departments and mainstream politics that the marches became drunken bacchanals, with little to no connection to anything traditionally Irish.

We hope you enjoy these contributions, and find them useful in debunking the myths that surround this season. For more on our recent projects (such as our in-depth article, “Children and Family in Gaelic Polytheism”), see the Gaol Naofa site. Sláinte Mhaith.
Posted by Kathryn Price NicDhàna at 6:25 PM No comments:

It's that time of the year again... 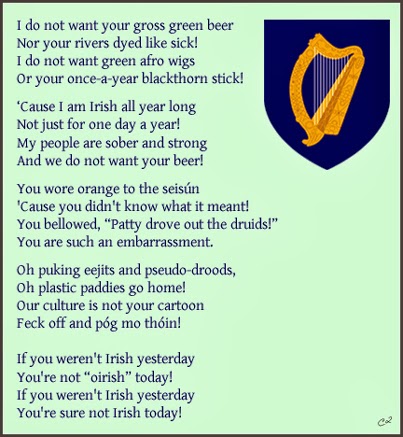