Justice for Trayvon, Marissa and CeCe

Statement from the CAORANN Council:

We at CAORANN are outraged at the atrocity that is the Zimmerman verdict. The system has once again failed People of Colour (POC) in America. We stand with our loved ones for whom this sort of injustice is nothing new, who have borne the brunt of this kind of deadly discrimination their entire lives, who carry the burden of generational trauma, and who have now been shown that they don't even have the right to defend their lives. An unarmed child has been murdered, and we are supposed to accept that a grown man with a gun, who stalked, chased and then murdered him in cold blood was justified in doing so. We are asked to "accept the verdict."

We do not accept the verdict.

We join in the call by the NAACP for the Department of Justice to follow the clear precedents set by the Byrd and Shepard verdicts and charge George Zimmerman with Hate Crime and Civil Rights Violations resulting in the death of a human being, on the Federal level.

We also call for justice for Marissa Alexander, a mother with no criminal record, a Master's degree, a weapons permit and a restraining order against her abusive ex-husband. She has been sentenced to twenty years in prison simply for firing a warning shot to scare off her attacker. No one was even wounded. The case against her was presented by the same Florida prosecutor who failed to convict George Zimmerman.

The mothers and aunties and grandmothers on the CAORANN council stand with the mothers who have lost their children to racist violence, and the mothers who have been jailed for defending themselves from abusers. We mourn the loss of this young man, the jailing of an innocent woman, and the ugly blood stain that once again spreads across the white hands of America. As a predominantly white group, we know that the pain those of us with white privilege feel, as gutted as we feel, is miniscule compared to that of our friends who have kids who look like Trayvon Martin, who could be shot down like Trayvon, who were already dealing with culture-wide PTSD before this happened, and who have lived with this fear for their entire lives. We fear for all the People of Colour we know and love who could also be shot down, whose words and work are dismissed or stolen every day, and who are dealing with racist trolling, physical assaults, and even murder, just for standing up for themselves and their communities.

We offer our prayers for justice and compassion.

But compassion is not enough. Feeling grief is not enough. From that grief must come action. We affirm that we must continue to work in the communities to which we have access to dismantle the deadly system of white privilege and white supremacy in America, and in all the countries where racism is taking the lives of our friends, relatives and beloved allies.

In grief, solidarity and determination,

The CAORANN Council,
Celts Against Oppression, Racism and Neo-Nazism

ETA: After some initial technical difficulties, we've now posted the above text on the CAORANN website, as well. We apologize for our delay in getting this out. We have been working on these issues locally, processing with other activists, and having trouble speaking through our anger well enough to compose anything longer than a tweet.

Death-Dealing Plastic Shaman to be Released from Prison

James Arthur Ray, convicted of three counts of Negligent Homicide for killing three people (and injuring over twenty more) in a racist, humiliating, pretendian debacle in a plastic death tent, will be loose in just 10 Days. He killed three people, but he's being turned loose. Here's a refresher, from the Usual Suspects:

Here's most of what I've written about James Ray over the past few years: James Ray Sweat Deaths Posts.

James Ray was able to get away with killing these people due to two things: racism and greed. Racism led otherwise-intelligent people to think they could trust a white man to lead ceremonies that Native people had said he had no right or ability to lead. They bought the racist fantasy that they could be the "better Indians" - that they could attain in one week, or a series of seminars, things it takes normal people decades to achieve, if they ever achieve it at all. And they were greedy enough that they bought the illogical proposal that if they did his silly and offensive newage rituals - gross fabrications mixed with pale imitations of spiritual ceremonies he only pretended to know - that it would bring them material riches. They thought they were better than Native people, they thought they were above the laws of nature. And as long as people are willing to believe those kinds of offensive and absurd falsehoods, frauds and exploiters like Ray will get the chance to kill them. 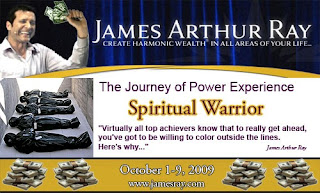 Posted by Kathryn Price NicDhàna at 10:58 PM No comments: