The email, phone, letter and new media protest against MTV's racist show, The Dudesons in America: Cowboys and Findians, has resulted in only minor concessions from MTV. 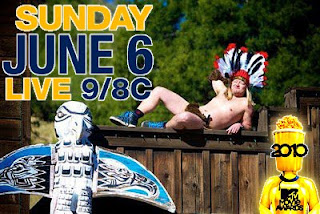 They pulled the episode from the web, but are still airing it in reruns on MTV2. Out of the many people who have written in protest, only AIM Santa Barbara has received a response - a rather bland and vague note from AJ Sarcione, the Senior Publicist for the show:


Members of AIM, BICONA, and others have continued to try to explain why this show is offensive, and have invited Mr. Sarcione to meet with them, but there has been no further response from Mr. Sarcione or any other MTV executives. The deadline is tomorrow, and there has been no indication that the demands will be met. So plans are proceeding for a full boycott of MTV, VIACOM, all of their sponsors, and protests at their doorsteps.

This coming Sunday, June 6, there will be a protest at the MTV Movie Awards. The show starts on Sunday, June 6 at 9 p.m. ET, at the Gibson Amphitheatre - 100 Universal City Plaza,  Universal City, CA - so the red carpet show will probably begin at about 3 p.m. Pacific.

This is COMMUNITY ACTION ! Grassroots at its finest! WE'RE SEEKING EVERYONE OF ALL RACES, IN EVERY COUNTY OF AMERICA (ESPECIALLY LOS ANGELES COUNTIES) WHO CARE ABOUT AMERICAN INDIAN ISSUES!!!

BICONA (Black Indian Confederacy Of North America) is looking at organizing a protest with the Santa Barbara and the Los Angeles chapters of The American Indian Movement (AIM), against MTV because of their blatant disrespect for Native culture in their "Cowboys and Findians" episode. BICONA and AIM are looking for others to join in on the mission.